I’ve made a video game… unplugged!

Game Industry Conference always serves a huge dose of brilliant workshops every year. To my surprise, on the very first day of its course, the 2019 edition offered what turned out to be my all-time favorite workshop.

‘Let’s make a video game… unplugged!’ – hosted by Tymon Smektała (Techland/Economics University Wroclaw) made me really excited when I first saw the announcement on the GIC website.

Let’s have a look at the workshop’s description:

Can you play Grand Theft Auto with the use of dice and does Diablo make sense as a family board game? Learn how to create paper versions of popular video games!

Yet there was one thing that had me concerned. The workshop was labeled as one for beginners. I’d had some experience with game design, so I wasn’t sure if it was for me. I decided to give it a shot anyway.

And it was a great decision, that’s for sure!

As soon as I entered the workshop room, all participants were given ‘creative packs’ – plasticine, chess boards with the pieces, pens, sticky notes, dice, and figurines. Different shapes, textures, and colors constantly called to us: use me, make awesome things, be open-minded, use your imagination! 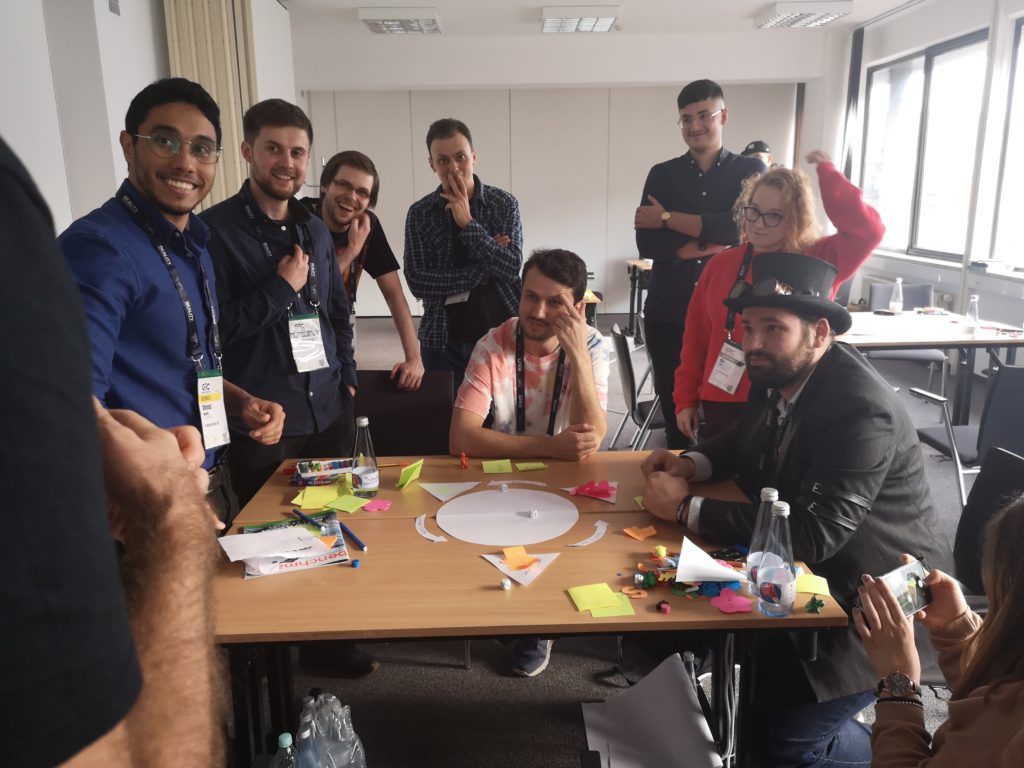 Once we were introduced to the theory of the concept, we got straight to the practice part. We listed some of our favorite games on the whiteboard, and each group picked one title. We chose Cuphead.

Ok… So how to make a paper version of Cuphead, you ask? 🙂

First off, we had to define core gameplay mechanics, gameplay loop and the essence of experience, which for Cuphead are:

A big part of the workshop’s success was having a good team. Openness in sharing ideas was key to making creative analyses. Luckily, my fellow teammates turned out to be amazing. We’d tested several prototypes, discussed vigorously and consulted some ideas with the host. By the time the workshop came to a close, we’d had an actual, working game that everyone present was able to play.

I could write for pages, but this small gameplay video should make a better job of showing how it works.

Here is a video of one of the other groups’ take on Rocket League. It would be longer, but in the middle of it my cousin phoned me to ask for instructions on how to feed my cats, so…

In my opinion, this exercise is a great beginning to every creative process in a game development company. Not only does it let you train your design skills, but also it helps in team building at the same time.

What do you think of this kind of prototyping?